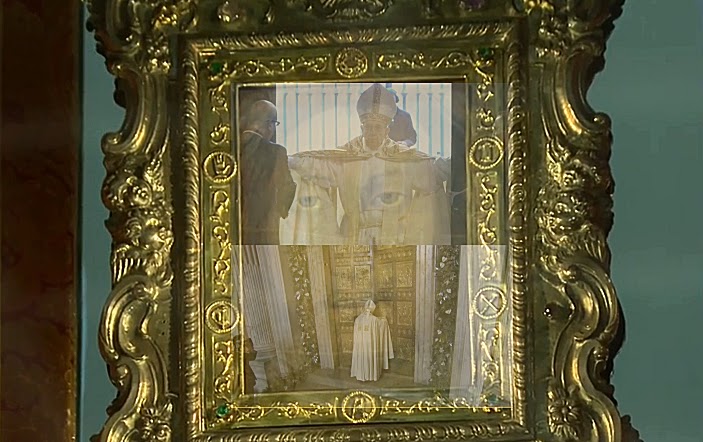 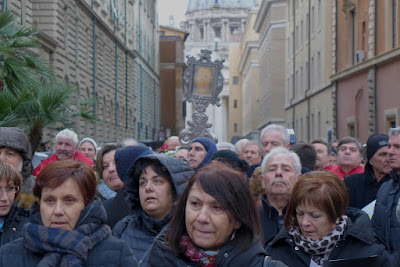 Procession from St. Peter's to Santo Spirito in Sassia
by Raymond Frost


I received this welcome letter from Antonio Bini earlier today Dear Ray I am sending you the poster for the premiere showing of the documentary which will start at 6:30pm on Saturday June 4, 2016 in the San Damiano room, adjacent to the Basilica of the Holy Face of Manoppello.
The documentary, which lasts approximately 25 minutes, features the commemoration - which took place January 16, 2016 - of the Veronica procession, from St. Peter's Basilica to the Church of Santo Spirito in Sassia, initiated by Pope Innocent III in the year 1208. The documentary, produced by Paul Badde and directed by Marco Gandolfo, will soon be aired on the German language portion of the EWTN Catholic network. An upcoming version in English will air on EWTN in the USA.
It was Paul Badde himself who desired that those who carried the Holy Face, as well as the choir of the Basilica and many others from Manoppello who participated in the Roman procession could have the opportunity to see the documentary before it is aired.
For Paul Badde the screening of the documentary is also an opportunity to thank the citizens of Manoppello who prayed for him during his difficult post-operation recovery which included a period of three months of hospitalization in a Munich hospital. As soon as his strength allowed him Badde returned to complete this important documentary that begins with historical notes on the ancient hospital of Santo Spirito in Sassia and then on the event established by Innocent III which, in fact, began the devotion of the Veronica in Rome. The film then reprises the procession as it proceeds from St. Peter's Square to the Basilica and then in the direction towards the nearby church of Santo Spirito in Sassia.
The video is to be considered an authentic historical document as it includes an extensive summary of the homilies of the Prefect of the Papal Household, Archbishop Georg Ganswein, and Lebanese Archbishop Edmond Y. Farhat, who each make explicit references to the authenticity of the Holy Face. The documentary suceeds in capturing the mystical atmosphere of the precious church of Santo Spirito in Sassia, with footage (at times three cameras were in use) which gives a broad idea of ​​the crowd of devotees, whose emotion is stressed during the interview with Msgr. Jozef Bart, Polish rector of the Basilica of Santo Spirito in Sassia. I was there and I can testify to that. The flowers that you see at Santo Spirito in Sassia were donated by Daisy Neves. 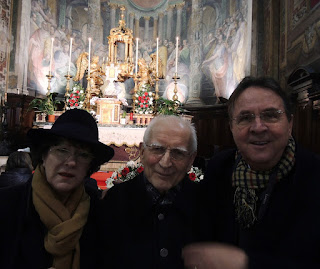 Paul will not be present at the showing of the documentary in Manoppello because he still is in need of rest. a warm greeting, Antonio
Pubblicato da Antonio Teseo (foto di quando ero ancora un ragazzo) a 18:56